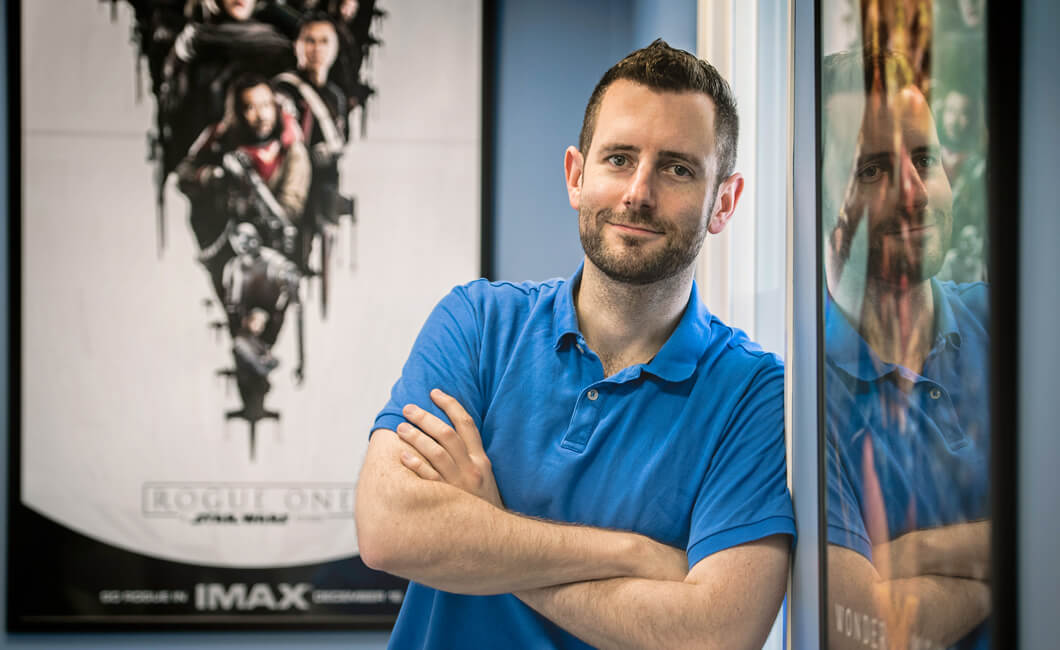 FXHOME is one of Norwich’s underground tech companies. Understated but quietly confident and packing a punch in the visual-effects world. As specialist software developers for filmmakers and photographers, the company has over a million amateur and professional users around the world.

I first met its Founder, Josh Davies, earlier this year at a party. A few beers later and we were deeply engaged in a conversation about Virtual Reality (VR). It was fascinating stuff. Sadly, I couldn’t fully recall what we had talked about come the morning. So, a few weeks later, we got back together to continue the conversation in a more formal environment. Josh lives and breathes technology and is drawn towards VR and its potential for transforming the way in which we consume content.

There’re plenty of people talking about VR, but few possess the creative thinking or technical ability to really push this technology forward. I began the interview thinking about VR in what I now know was a very rudimentary and 2D way. I came away with a realisation that the world we know is about to get a whole lot bigger, from how we teach our children through to the holidays we take and the way in which we carry out our jobs day-to-day.

When most people think of VR they think of Sci-Fi films like Minority Report. How far are we from that reality?

It’s happening already, it’s just expensive. There’s not going to be this key moment that suddenly makes everything happen. To me it’s like the beginnings of the internet when everyone knew they should have a website but didn’t know what do with it. Or the iPhone 1 where you couldn’t even buy apps for it, yet everyone felt that something was going to happen.

Everyone in the tech industry wants VR to happen because there’s a huge amount of money to be made, which in turn is pushing the technology forward. VR is at that early point where you just make money on every iteration. You get a small number of early adopters spending huge sums. Then 2 or 3 iterations in you get everyone spending money but you can still make some huge leaps on new versions.

This year Apple is making every single new device capable of creating or viewing VR/AR. They will give us this huge leap forward, giving people more access to VR. The price of technology will drop over the next two years to make it affordable, but what needs to happen is that people need to experience it and that’s a slow adoption.

How do you get people to try something that they can’t see?

VR is not nearly as obvious as other technologies so it’s a new marketing challenge. If you’re showing something to someone in VR it inherently doesn’t look very cool – often inferior to standard video games. That is their big hurdle, showing someone an experience that you only really get if you’re in VR.

The one thing parents don’t mind their kids playing with is the iPad or a tablet. These devices will be instrumental in VR. Imagine being able to interact with Peppa Pig on your kitchen table, how rewarding that would be for a kid?

We’re also seeing film festivals around the world allowing entries for VR and 360 video experiences. So, potentially, an older sector will begin to experience VR. Adoption is about taking it away from being a video game. There will still be video games but there will also be experiences and trips that you will be able to buy in VR where someone will go somewhere live and do something like scuba diving. These experiences will be what convinces the older generation. Of course, for the male middle generation, the adult film industry is the driving force for a lot of technology moving forward.

Which industry is making the biggest investment in VR?

The biggest investment – outside of the people that make the technology – is training. There’s a lot of money being spent in general in building health and safety and training experiences in jobs like car production lines where the process can very easily be re-created.

That side of things will get even more exciting when what you’re doing in VR is actually controlling something mechanically. Particularly in dangerous circumstances where you don’t want to send someone in to diffuse something or where there’s radiation. We’ve seen this in sci-fi countless times. The best surgeon in the world on holiday in Florida could do brain surgery on someone at death’s door in London – we’re not far away from it. Insurance is probably the biggest issue.

Where will we experience VR in everyday life?

VR will be the most awesome education tool. All these ways of experiencing other countries and cultures, that’s exactly what the world needs and VR enables you to experience it first-hand right there. I imagine there will be 360 video cameras in every major city in the world which educational institutes will be able to tap into, to be able to see how busy it is in Times Square.

VR will also likely play a huge part in video conferencing and the visualisation of data. Really large sets of data could be visualised in 3D in front of you and you can see something physically get larger or smaller. That’s transformational for business people to be able to make better decisions.

I think advertising in VR will become a big deal. In the early noughties video games there was a push in putting adverts into the background of games. You could be playing a football game or a car racing game and the billboards were actual adverts. But what advertisers realised is that if you’re in a car doing 200 mph down a race track you didn’t look at the adverts. In VR, you experience things like you experience them in real life. So, in VR, you’ll be looking around and an advert will persist in your memory in a very different way to how it would in a video game.

The interesting thing is that a lot of people assume that we will have something strapped to our faces all of the time. We’re not going to go into a dark room where we stay in VR all of the time. It will be about experiencing things that you can’t afford to experience or are not capable of experiencing. Who wouldn’t want to be on the first tourist space trip, none of us can afford to be on that?

What’s your personal interest in VR?

At FXHOME we’re looking at the way in which VR could improve the day-to-day job of someone who is a creator or an animator. While the creative industries tend to say they operate with little money, a lot of the equipment they use is extremely expensive. The things they are willing to spend most money on are those that give them recognition with the client, or saves so much time that it is saving them money each time that they use it.

Even for an expert, animation for instance can be very time-consuming. We’re creating ways of taking physical movements and transferring them into animated movements within a piece of software. Your eyes become the camera and your hands become whatever it is you are trying to animate. You can do something that takes hours in seconds.

“VR is transformative at pretty much every content creation level and then every level at how people consume content.”

Do we have the skills to create the right kind of content?

There is a huge talent pool of people who can change something from being one mood to another by understanding lighting and an audience. But there are huge gaps in a lot of the production work that is being done for VR – even in 360 video recording – because the people most skilled are not working on it.

Someone like Jonathan Jones at Ember Films for instance has had to think about film when it was SD, then HD, 4K and now filming at 6K. There’s loads of stuff the same but there’s things he’s had to learn and perfect for the new technology. He’s ideally placed to create something beautiful in VR, more so than a technical person.

The most innovative content will come from high-art people who know how to get an emotive response working with technology people. The skills are out there but they’re in industries that don’t typically talk to each other or are sceptical of each other. It is happening but it needs to happen more quickly.

Absolutely. We’ve got a good one in Norwich in fact, Immersive VR. But the problem with the whole idea of bringing those sides together is that they are both traditionally – when separate – very expensive. High-end video production costs thousands of pounds a minute, producing video game content or 3D models is again very expensive. Bringing the two together means you get both costs. If you’re going to be the brand to create this amazing seminal piece you’re going to have to spend money and that’s where it’s going to take some brave people. There’s been a lot done already but it’s going to take someone to get it right. I’d love to get involved, for us to be the technical side of some kind of partnership.

If someone wanted to experience the best VR, where would you point them?